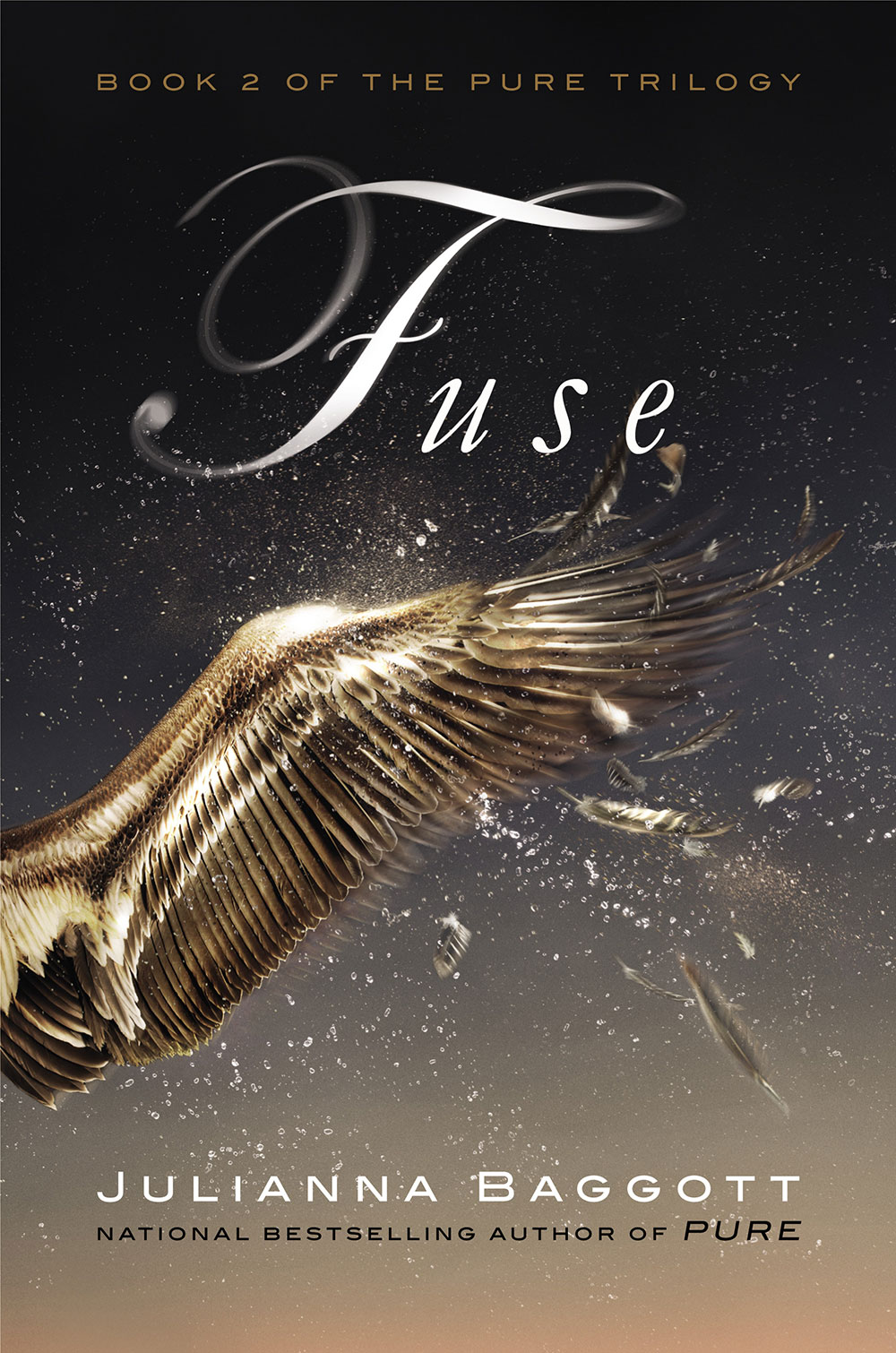 An Amazon Best Book of the Month, February 2013

We want our son returned.

This girl is proof that we can save you all. If you ignore our plea, we will kill our hostages one at a time.

To be a Pure is to be perfect, untouched by Detonations that scarred the earth, and sheltered inside the paradise that is the Dome. But Partridge escaped to the outside world, where Wretches struggle to survive amid smoke and ash. Now, at the command of Partridge’s father, the Dome is unleashing nightmare after nightmare upon the Wretches in an effort to get him back.

At Partridge’s side is a small band of those united against the Dome: Lyda, the warrior; Bradwell, the revolutionary; El Capitan, the guard; and Pressia, the young woman whose mysterious past ties her to Partridge in ways she never could have imagined. Long ago a plan was hatched that could mean the earth’s ultimate doom. Now only Partridge and Pressia can set things right.

To save millions of innocent lives, Partridge must risk his own by returning to the Dome and facing his most terrifying challenge. And Pressia, armed only with a mysterious Black Box containing a set of cryptic clues, must travel to the very ends of the earth, to a place where no map can guide her. If they succeed, the world will be saved. But should they fail, humankind will pay a terrible price . . . 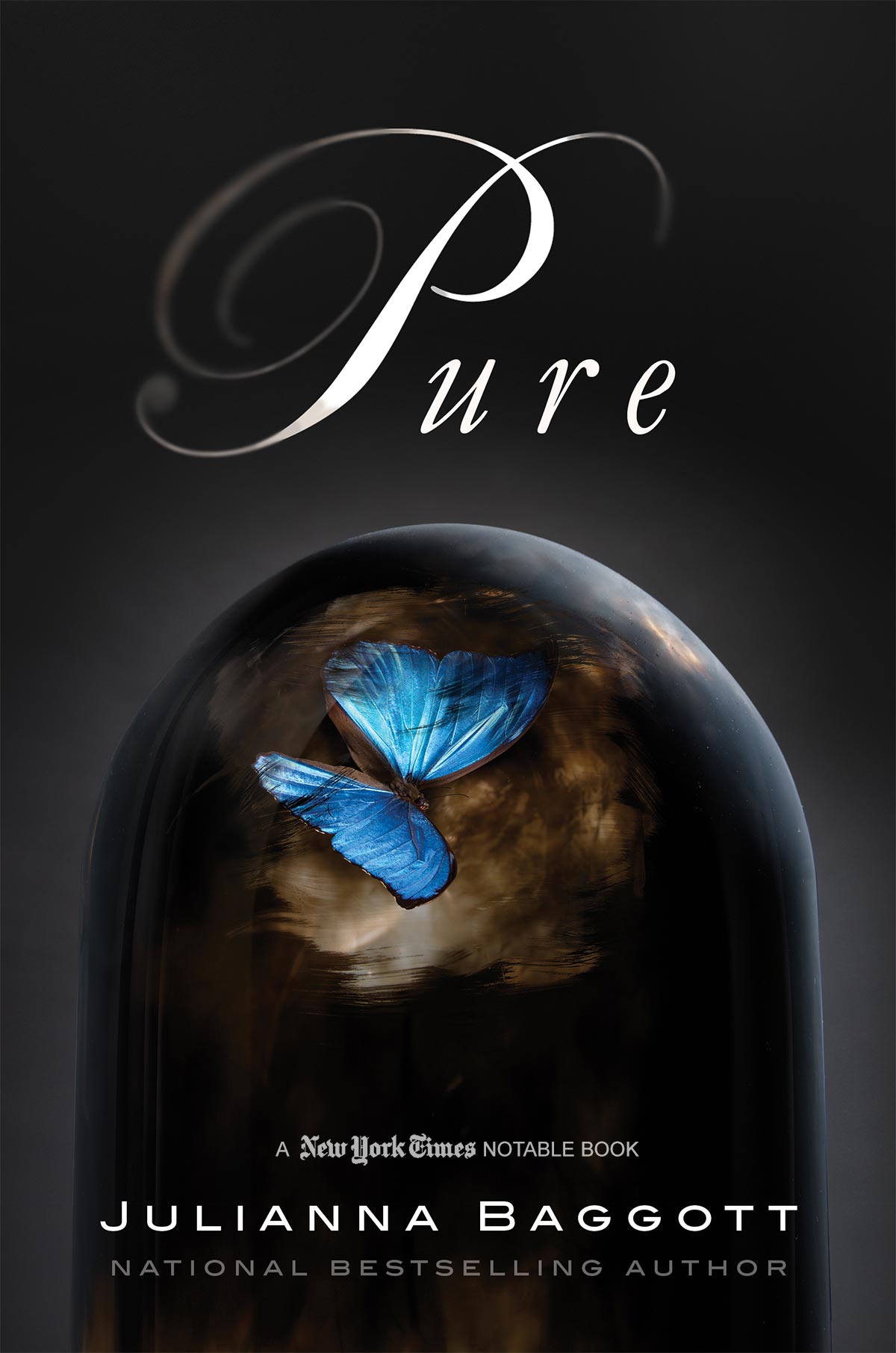 A New York Times Notable Book of the Year

Film Rights have been acquired by Fox2000, Karen Rosenfelt producing

A Suspense Magazine Best of 2012

“Baggott’s postapocalyptic world is realized to stunning cinematic effect… the “Mad Max” landscape creating the backdrop for a succession of violent confrontations in which the stakes are satisfyingly high. What lifts Pure from the glut of blood-spattered young adult fiction is not the story Baggott tells but the exquisite precision of her prose.”
—The New York Times Book Review

“A great gorgeous whirlwind of a novel, boundless in its imagination. You will be swept away.”
—Justin Cronin, New York Times bestselling author of The Passage

“Pure  is not just the most extraordinary coming-of-age novel I’ve ever read, it is also a beautiful and savage metaphorical assessment of how all of us live in this present age. This is an important book by one of our finest writers.C
—Robert Olen Butler, Pulitzer Prize winner

“…Pure is a dark adventure that is both startling and addictive at once. Pressia Belze is one part manga heroine and one part post-apocalyptic Alice, stranded in a surreal Wonderland where everyone and everything resonates with what has been lost. Breathtaking and frightening. I couldn’t stop reading PURE.”
—Danielle Trussoni, New York Times bestselling author of Angelology

“A boiling and roiling glorious mosh-pit of a book, full of wonderful weirdness, tenderness, and wild suspense. If Katniss could jump out of her own book and pick a great friend, I think she’d find and excellent candidate in Pressia.”
—Aimee Bender, bestselling author of The Particular Sadness of Lemon Cake

“Baggott delves fearlessly into a grotesque and fascinating future populated by strangely endearing victims (and perpetrators) of a wholly unique apocalypse. And trust me, PURE packs one hell of an apocalypse.”
—Daniel H. Wilson, New York Times bestselling author of Robopocalypse

“Pure is testament to the might and beauty of Grimm-dark imagination…. A sublime novel by one of our most important storytellers.”
—William Giraldi, author of Busy Monsters

“Julianna Baggott has created a mesmerizing, nightmarish apocalyptic world, populated by denizens who suffer out bleak existence bearing the literal marks of what was closest to them in their previous life…. Sure to haunt the imagination of readers for a long, long time.”
—Matt Bondurant, author of The Wettest County in the World and The Night Swimmer

“Baggott’s imagery is matchless in this freakish and compelling tale of love and revolution…. Verdict: A sure hit for fans of Suzanne Collins’s The Hunger Games…. ”
—Library Journal, starred review of the audiobook

“It’s a concept which jars at first, but then becomes a constant and poignant reminder of a world irretrievably lost….Baggott tells what might have been an overly grim tale with crystalline precision…”
—The Guardian (UK)

“…make room on your shelf for Pure…Dark and wildly imaginative,… If you thought Lisbeth Salander [the lead actress Girl with a Dragon Tattoo] was a bizarre-looking heroine, you haven’t seen Pressia yet!”
— Entertainment Weekly.com, on their 24-Hour Exclusive of the Book Trailer for Pure

“…[Baggott's] skills as a poet shine through in some understatedly well-crafted prose – descriptions are sketched with crystalline precision, not floweriness – but she also has a flair for keeping the pages turning with a combination of short, sharp action beats and drip-fed revelations. Strong stuff, and gripping to boot.”
—Nic Clarke, SFX (UK)

“[Pure] is a window into an apocalyptic world, never before imagined in literature or film… Pure burns along at a savage pace and the few passages where Baggott allows us to pause become voyeuristic windows into her extraordinarily imagined world. [Baggott's] … real characters … will haunt you…” —Susan May for Suspense Magazine

“A compelling and almost hypnotic read.” —The British Fantasy Society

“Laden with haunting imagery, powerful prose, and well-written characters, Pure is sure to win the hearts of teenagers and adults alike.” —Examiner.com

“Julianna Baggott’s novel of a post-apocolyptic world is gritty, unadulterated and unapologetic in its treatment of characters. The author does a superb job creating realistic landscapes, and horrible mutations … the quality of the writing will make the reader want to continue to the very end.” — Netgalley

“The world of Julianna Baggott’s soon-to-be-released Pure is amazing. It’s dark and twisted and complex…. Take a look at the trailer for the book, and try not to die of anticipation as you wait for the publication date!”— Figment.com

Listed in Library Journal’s 25 Top Fiction Titles from January Through April 2012: “The first in a postapocalyptic trilogy, already being compared to Justin Cronin’s The Passage and Suzanne Collins’s The Hunger Games…I’ve been staying up past midnight to read it.” 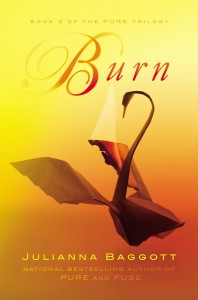